In Europe, two of the hottest family topics discussed, both at political round tables and at family dinner tables, are the question of daddy’s presence in a young child’s life and the parental leave systems’ implications for gender equality.

The Nordic countries, (Denmark, Sweden, Iceland, Finland and Norway) have the most generous parental leave regulations worldwide. Parents are encouraged to take around a year of paid leave after the birth of a new child in the family. Traditionally it is the mother who has stayed at home for this period. Slowly but steadily, daddies are taking a lager piece of this cake. In Norway today, 10 of the total 46 weeks of parental leave, are reserved for dads, and cannot be transferred to the mother. If daddy does not take this leave, the total leave period will be 36 weeks. Most dads stays home these ten weeks. To specify that the father must take ten weeks is meant to encourage men to take on more responsibility in the home sphere, and to promote more gender equality in the work sphere. A 50/50-split of the parental leave is in general looked upon as an ideal, at least from the government’s point of view. 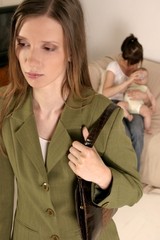 Parental leave around the world

The United Nations (U.N.) has declared Norway as the world’s most gender egalitarian country, and the other Nordic countries are right behind us on this list. Nowhere else in the world is dad given such a long paternity leave. Internationally the parental leave is quite a different story.

In Asia we see from zero to about ten days of unpaid family leave granted to dads. In Africa ten days of paid leave for family events is not uncommon. In the Americas we find between one and seven days of paid family leave in countries like Brazil, Chile, Paraguay and the Bahamas. In Europe the paternity leave varies a lot, from countries like Romania and Portugal that only grant a couple of days, to Iceland at the top with three months’ paid leave for dad.

Let’s go back to Norway. Here we have had parts of the parental leave reserved for dad for almost 20 years now. Dad can theoretically stay at home for close to 90% of the leave period, and a few dads do. But in the world’s most gender-equal country, we would maybe expect around a 50/50 split. But daddies only stay at home for 11% of the total leave period.

Gender researchers have found an interesting phenomenon they call the gender equality paradox. This paradox contains the fact that the more equal men and women get with regards to personal economy, social and cultural standing and with regards to education, the more traditional choices are made by the families. So, when given a real choice, women statistically prefer to stay at home with their children and men prefer to be main provider for the family.

A salary gap of 15% is found between men and women in Norway, and the main reason for this is to a large extent that women take longer parental leaves than men. The government is not satisfied with this salary gap or the paternal leave numbers, and many recommend a three-way-split as the cure. That is, a third of the leave would be reserved mom, a third for dad, and a third left to the parents themselves to split as they see fit. In Iceland, such a three-way-split is recently in place. 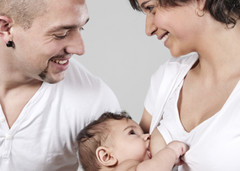 The discussions run high and hot-tempered at times. Many argue that this three-way split is a violation of every family’s right to choose the division of the parental leave period themselves. Other feel strongly that the mother should be allowed to stay home, and that a three way split deprives the mother of a right that is traditionally hers. Some are concerned that this split will negatively affect young men’s place in the labor market. Some say that the split is necessary to force men into the home, and to force women to allow men in. Arguments are made that a three-way split is acceptable if the total leave time is increased accordingly, keeping “mum’s leave” as it is today.

Will the children be paying for this quest for gender equality with less breastfeeding, less stability and a change of principal caregiver at a sensitive age, or is this risk balanced by the child’s and dad’s opportunity to form deeper connection to each other?

Is this a step toward attachment-friendly family politics or a step away? The experts do not agree, and there is nowhere to turn to learn from other countries’ experiences. Early signals from Iceland indicate that the split has no short-term effect on closing the salary gap. No research has been published focusing on the attachment consequences for the whole family. 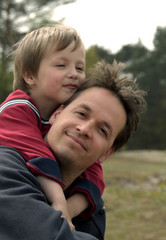 Mothers in Norway who go back to work are allowed one hour paid leave every day to keep up breastfeeding, and some companies even allow two hours of paid “nursing-leave”. This is used as a strong argument together with the fact that mom can express milk and dad can give this milk from bottles. This argument totally ignores the breastfeeding on cue benefits that extend nourishment. If baby and dad are going to develop the close bond that bottle-feeding mothers and their attached children have, this bond need to form early, and then on the expense of the mother-child attachment. To be able to model breastfeeding when bottle-feeding is not that easy if it is to be started by dad when the baby is six months. Fathers can be just as attached as mothers, and if they start bottle-feeding on cue from the start, nothing holds fathers back compared to mothers in general. But young children need one primary attachment point until they are ready to extend their attachment to more people.

The same goes for all other attachment issues, not only breastfeeding. The children’s attachment is not gender specific. They can have both fathers and mothers as primary locus of security and love. But not both at the same time when young. In most families the mother has this privileged role of primary attachment, and the fathers time will come. In due time children can become just as attached to fathers as mothers, we just need to give them a bit of time to mature. That would be the perfect time for paternal leave to start – when the child is ready to have extended focus.

Maybe one day the discussions will turn from gender equality (where closing a salary gap is the main measurement) toward how to reach equitable gender roles in the children’s and families’ best interests.